University students who moderately consume beer or wine adhere more to a Mediterranean Diet, according to a UMH study

A paper published this month in the scientific journal Gaceta Sanitaria shows that students who moderately consume beer, wine, or both beverages had a higher adherence to the traditional Mediterranean Diet. This study was conducted with data from the Diet, Health and Anthropometry in a University Population Study (DiSA) at the Miguel Hernández University of Elche, in collaboration with the program Healthy UMH. This research included a sample of 1,098 UMH health sciences students aged 17-35. 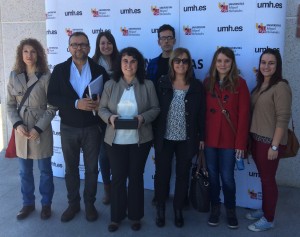 The study was carried out at the UMH Nutritional Epidemiology Unit and led by Professor of Preventive Medicine and Public Health, Jesús Vioque. This research shows that moderate drinkers of wine and/or beer adhere more to the Mediterranean Diet than non-drinkers or those drinkers who combine all types of alcoholic beverages. Non-drinkers consumed less fish and more meat every day, whereas drinkers of all types of alcoholic beverages consumed fewer fruits and vegetables and twice as much meat than exclusive beer and/or wine drinkers.

The study participants responded to questions about their alcohol intake, diet, and lifestyles. The results indicated that 18.9% of them only moderately consumed wine or beer, 19.5% did not drink, and 61.6% consumed all kinds of alcoholic beverages, including those with high alcohol contents. The mean overall alcohol consumption was 4.3 grams/day, a level that can be considered between low and moderate, as it is below the 11.8 grams/day observed for the same age range in the Spanish National Health Survey conducted in 2011-12.

The authors indicate in this study that moderate daily consumption of alcohol, especially red wine, and whenever possible during meals, is among the attributes and recommendations of the Mediterranean Diet. However, in their work, the very authors recognized the controversy existing within the international scientific community concerning the potential harms and benefits from moderate alcohol consumption, given the negative effects that may result from its excess. In any case, this paper’s results demonstrate the need to jointly study the diet when analyzing the effects from alcohol given the close relationship between the two.