On December 27, the Miguel Hernández University of Elche (UMH) celebrated its twentieth birthday. This is the day that in 1996 the Cortes Valencianas approved founding the UMH, and it was a few months later, in September 1997, that the UMH began teaching its very first classes. To mark this anniversary, the UMH has constituted a commission to put several activities in motion. 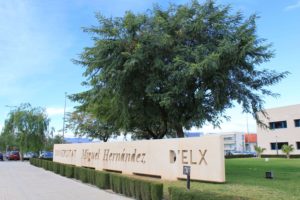 In 1997, the UMH began its journey with a grand total of 3,923 students and 33 programs, and these included 10 licenciaturas, 8 diplomaturas, and 15 doctoral programs. Today, the UMH has 13,410 students enrolled in 88 programs, of which 25 are undergraduate, 1 is a double bachelor’s, 49 are master’s, and 13 are doctoral programs.

Furthermore, the upcoming year is going to special for the Miguel Hernández University, as the Consell and the Cortes Generales have declared 2017 as the “Year of Miguel Hernández” to commemorate the 75th anniversary of the death of the poet from Orihuela. To celebrate this milestone, the UMH is preparing a multitude of activities, and it will participate in other commemorative acts, such as a special edition of the Senda del Poeta along with the town halls through which it traverses, the Miguel Hernández Chair of this university, the Miguel Hernández Foundation, and the Juan Gil Albert Institute of Culture.