The Miguel Hernández University of Elche (UMH) has inaugurated the new V-Running Path on its Elche Campus. This sporting installation features a route that is 2,395 meters in length and covered by five different surfaces: packed sand, fine gravel, synthetic rubber, artificial grass, and concrete. 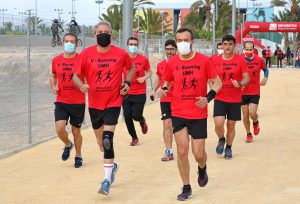 This circuit, which enables variable running, is a product of the cooperation between the UMH Center for Research in Sports Sciences (CID) and the Office of Sports and Healthy Campus. More specifically, this project was based on one of the lines of research at the CID, where motor variability is analyzed and how this is a form for exploring and changing movement, as well as for facilitating an ability to adaptation. As one possible application for this line, the UMH researchers thought about designing a route whose surface changes continuously as runners traverse it. Their reasoning was that this kind of route would facilitate such ability to adaptation, provoke distinct types of support during runs and different types of impulse in each step, which ultimately might serve to reduce possible injuries that can result from repeated impact, or even prevent these types of injuries from occurring.

The five different surfaces seemingly alternate in a random manner along the path, so runners encounter distinct surfaces upon which they are forced to adapt. Its hard concrete sections provide high coefficients of restitution, and therefore, are high-impact. Other sections along the route, such as those with the rubber and grass, transfer much lower impact. The gravel and sand sections were chosen because they provide some surface unevenness and generate changes in the foot angle.

With this initiative, the UMH aligns itself with Sustainable Development Goal 3, by fostering good health and well-being for the university community and its surroundings.

Further information about this can be found at https://deportes.umh.es/instalaciones-y-tarifas/circuito-v-running/