More than 30 actions make up the planned activities from UMH Life, an initiative aimed mainly at the student body of the Miguel Hernández University of Elche (UMH). The goal of this initiative, which is promoted by the Vice Rectorate for Student Affairs and Coordination, is to kick start campus life and create bonds among university students. 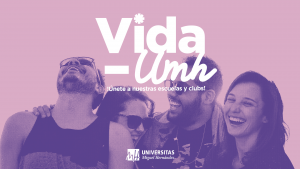 Starting in mid-October and running through December, the vice rectorate is holding seminars, master classes, food & drink tastings, plus workshops. Moreover, to spur interest in the project, these activities are free of charge for students. UMH Project Life is comprised of the Cooking School, the School of the Music Industry (ESIM), and the School of Radio and Podcasts. On October 14, Susi Díaz, owner of a Michelin star, is opening the Cooking School, and UMH Doctor Honoris Causa, Paco Torreblanca, is charged with closing the school. Included among the agenda of activities from this first school are UMH workshops and monographs entitled ‘Pizzas and other Italian Dough,’ Becoming a Rice Master,’ ‘Veggie Lovers,’ ‘Wine Tasting,’ ‘Grandma’s Kitchen,’ and ‘Christmas Sweets,’ as well as a master class led by master pastry chef Torreblanca.

The School of the Music Industry is offering in-person instruction on drums, bass, guitar, keyboards, and voice, as well as sessions where students can jam with their fellow musicians and form part of a band. There is also a freestyle rap contest, as well as the master class of ‘Learn to Be a Professional DJ,’ led by Eme DJ (Marta Fierro), an artist who has shared the stage with David Guetta.

Activities by the third school, that of Radio and Podcasts, take place at radio studios on the four UMH campuses. Following its presentation is the monograph entitled, ‘Become Alive via the Radio and Podcast,’ and the host of the Radio Marca program, ‘La pizarra de Quintana’ (Quintana’s Blackboard), Miguel Quintana, will present the master class, ‘How to Build Your Own Career.’

Similarly, UMH Life is promoting seven clubs with a variety of themes, clubs that pursue the philosophy of gathering students with like-minded tastes to become meeting places where they can congregate and have a good time. The first of these is the Club of Comics and Illustration; participating in this club is cartoonist from the magazine El Jueves, Dani Gove. The Magic Club is offering a session with card tricks, offered up by illusionist, Joan Vida. The Astronomy Club meets for making both night and daytime observations. Members in the Photography Club learn the skills for capturing images on their smartphones. The Fashion Club is offering a session on printing T-shirts and another on fabric design. The Urban Dance Club features styles of hip-hop, commercial, and urban dance. Finally yet importantly is the Board Game Club, for aficionados thereof. For this club, the UMH is setting aside a space for conversion into a game room where students can meet, roll the dice, and play these games.

What’s more, the UMH Vice Rectorate for Student Affairs and Coordination has scheduled three large events for the Aula Magna of the Altabix Building on the Elche Campus. The first of these is set for October 22, beginning at 8 p.m., with a show by the comic duo of Pantomima Full. Next up is the informative and entertainment channel of the eSports ecosystem, Esportmaníacos, which will broadcast a program live from the UMH on November 11. Finally, surgeon and guest speaker, Mario Alonso Puig, is presenting on November 18.

The complete programming schedule can be consulted at: https://vidaumh.umh.es/