A group 60 podiatry, occupational therapy, and physiotherapy students from the Miguel Hernández University of Elche (UMH) will assist pilgrims along the Route of Santiago for a period of five weeks in the towns of Astorga and Villadangos del Páramo in the province of León. This activity, included among the activities of Healthy UMH, was made possible thanks to an agreement that the UMH Vice Rector for Institutional Relations, María Teresa Pérez Vázquez, reached with the city halls of these two León towns. 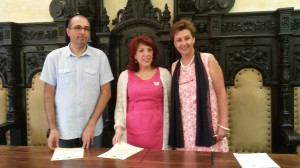 The Vice Rector signed a collaboration agreement this morning with the Astorga Mayor, Victorina Alonso Fernández, along with the representative of the Association of Friends of the Road to Santiago of Astorga and its Region, Juan Carlos Pérez Cabezas, in order to carry out these assistance efforts with pilgrims. Likewise, María Teresa Pérez Vázquez will sign an equivalent agreement tomorrow, on Thursday, July 10, with the Villadangos del Páramo City Hall. In addition to the UMH Vice Rector, the town’s mayor, Teodoro Martínez Sánchez, along with the director of the Proyecto Joven, Jorge Juan Peña Albillo, will attend the ceremony.

From July 7 until August 10, the group of UMH undergraduate podiatry, occupational therapy, and physiotherapy students will attend to and care for pilgrims at the lodge belonging to the Association of Friends of Pilgrim Siervas de María in Astorga and the municipal lodge in Villadangos del Páramo.

New this year to this initiative, which has been operating since 2002, includes the incorporation of physiotherapy students as well as conducting a study on the occupational profile of pilgrims, for which an assessment point has been set in motion that is divided into three areas.

The first area advises on matters of ergonomics: proper postures for tiring less while walking, appropriate backpack sizes with respect to each pilgrim, the best ways to distribute weight, in addition to tips on handling and the heights of trekking poles. The second area advises on healthy lifestyles. Depending upon the pace of the participants in the pilgrimage, proper foods are recommended along with the group they belong to, the quantity of water needed, the indicated breaks in accordance with age, and the recommended hours of rest.

The third area informs about the most accessible routes, the best-equipped lodges, and the technological applications available for obtaining information along the way. A survey is also given to the pilgrims to learn about the level of satisfaction with the work being done by the students.

The primary injuries attended to during the route are serous metatarsal blisters, which are the most frequent injuries in pilgrims, long-term blisters, tendinopathy, and injuries in the lower limb such as Achilles tendon pain.