Seventy-five percent of the patients with hemiplegia who have undergone tests at the Hospital of Alicante with a robotic arm or exoskeleton have managed to move it through a brain interface. Participating in this project, called Brain2Motion, are researchers from the Miguel Hernández University of Elche (UMH), the Cajal Institute at the Spanish National Research Council of Madrid, and the Hospital of Alicante. This system is an improvement for the patients, as they are involved cognitively to carry out the movement, and they are capable of moving the affected limb voluntarily. 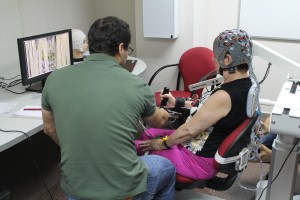 The objective of this research was to create a brain interface to help move the arm in patients who have lost the capacity of movement. This effect is achieved by the robotic arm built by the group from the Cajal Institute (CSIC), which is connected as an exoskeleton around the arm, and the affected person is capable of automatically moving it by thinking the action.

Faculty members from the Systems Engineering and Automation Department at the UMH developed the brain interface, which is used to detect the intention in patients to reach an object with their hand that is placed in front of them, as well as to detect that the patient is thinking about moving their hand. To accomplish this, a preceding study is conducted wherein the user has an established period of time to try to make extension and flexion movements in their arm. Signals from the patient’s brain activity (EEG) are recorded in order to obtain a pattern of user behavior occurring in these actions. During the experiment, the system detects the intention of extension or flexion movement in the arm or that the person is imagining a movement of their hand. This causes the actual movement of the arm placed on the ARMEO robotic exoskeleton by functional electrical stimulation.

The results show success in detecting the mental state of motor imagination close to 70%, while the success in detecting the intention of moving the arm is close to 80%. These results have enabled patients to successfully move their arm with their brain activity. Following the conclusions obtained, the research group has begun planning the clinical trials necessary to analyze rehabilitation of patients with this system versus traditional rehabilitation.

The participants in this project, led and coordinated by the Director of the Systems Engineering and Automation Department at the UMH, José María Azorín, include the university, the Neural Rehabilitation Group of the Cajal Institute at the Spanish National Research Council of Madrid (CSIC), and the University General Hospital of Alicante. It is financed by Spain’s Ministry of Economy and Competitiveness.