The Board of Trustees of the Miguel Hernández University of Elche (UMH) has announced the winners of the Eleventh Edition of the Board of Trustees Awards in its different categories. The prizes will be presented in a public ceremony on March 9 at noon in the Auditorium of the Rectorado & Consejo Social building on the Elche Campus. 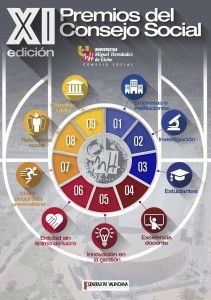 Laura Bernabeu López and Rubén Díez Esclapez are the recipients of the Students Award, which recognizes student development. This award values academic achievement, experience, professional skills, and the European dimensions of their academic records.

In the category of Research Groups, the Research Award was won by the Analysis, Intervention and Applied Therapy with Children and Adolescents Research Group, whose coordinator is Associate Professor José Pedro Espada Sánchez. In the Young Researchers category, the prize went to Associate Professor Mireia Orgilés Amorós from the Health Psychology Department, who will receive 2,000 euros for expenses related to her line of research.

The Teaching Excellence Award went to Associate Professor Adrián José Torregrosa Fuentes from the Department of Communications Engineering, and to Assistant Professor Agustín Pérez Martín from the Department of Economics and Financial Studies. This award is organized under a framework agreement signed between the UMH the Conselleria of Education, Research, Culture and Sport of the Generalitat Valenciana.

The Businesses and Institutions Award has gone to the company GESEM Consultoría y Finanzas, SLP. This recognizes the consolidated development of this Elche consultancy and advising firm in addition to its continuous collaboration with the UMH since it was founded.

Lara González Ortega, a UMH undergraduate student of Physical Activity and Sports Sciences, received the Best University Athlete Award for her outstanding national and international achievements in handball. Lara González is a member of the Spanish national handball team, and she has played in French and Hungarian leagues. Furthermore, the Honorary Award was presented to judoka María Bernabeu Avomo, who is coached by UMH Part-Time Lecturer Carlos Montero Carretero, “for her excellent and extensive athletic background in this field, and who recently won the silver medal at the 2015 World Judo Championships in the under 70 kg category.”

With respect to UMH chairs, in the Business and Patronage category, the award was given to Vistahermosa Reproductive Biomedicine, directed by José Jesús López Gálvez and Joaquín Rueda, and financed by the Hospital Clínica Vistahermosa. In the UMH institutional chair category, which recognizes achievements by either persons or entities in each UMH chair, the winners include: Gabriele Morelli, an Italian Hispanist specializing in Miguel Hernández, by the Miguel Hernández Chair; historian Francisco Moreno Sáez by the Pedro Ibarra Chair; Francisco García Linares, posthumously, by the Misteri d’Elx Chair; Pascual Urbán Brotons by the Palmeral d’Elx Chair; Rafael Ramos Fernández by the Dama d’Elx Chair; and the Sixto Marco Institution of Secondary Education by the UMH San Crispín Chair of Shoemakers. Furthermore, the jury gave an honorary award to Sixto Marco Marco to mark the centennial of his birth.

Tomás Salvador Vives Antón was the recipient of the Social Relevance Award. Positions that he has held, among others, include that of Vice-President and Judge of the Spanish Constitutional Court.

Finally, the UMH Board of Trustees presented the Nonprofit Entity Award to the Asociación Tamarit of persons with limiting and light disabilities of Elche, which since 2000 has been defending the rights of persons with intellectual development disorders, inserting them socially and professionally into society.