New Tendencies in Comprehensive Water Cycle Management, The World of the Terrorist, and Emotional Intelligence and Mindfulness are some of the courses that the Miguel Hernández University of Elche (UMH) is offering in the seventeenth edition of its Summer Courses. UMH Rector, Jesús Pastor Ciurana, Vice Rector for Culture and University Extension, Tatiana Sentamans, and Summer Course Director, Enrique Conejero, presented the 2016 Summer Courses this morning, which begin starting next week. In this year’s edition, the UMH is offering 103 courses that are given at 21 locations throughout the province of Alicante. 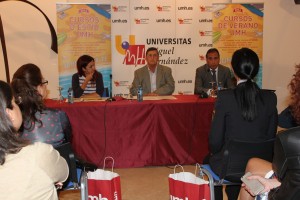 These courses offer encounters with specialists from various fields and disciplines in a way that the exchange of theories, experiences, and ideas produce, in addition to spreading knowledge, a different learning experience wherein active participation by its students is vital. In this edition, the UMH has expanded the number of its courses by 11% and has added new locations such as Castalla, Crevillente, Cox, and Denia. Summer courses will also be given in Alicante, Almoradí, Altea, Callosa de Segura, Elche, Dolores, Guardamar del Segura, Ibi, Novelda, Monóvar, Orihuela (Desamparados and Salesas), Rafal, Sant Joan d’Alacant, Santa Pola, Torrevieja, and at a virtual site.

The course design process strived to balance the needs and demands arising from the university community with those emanating from the various participating venues. These courses have been constructed as a forum for debate and a meeting activity between the university community and society, and aim to be creative and dynamic with intervention from different national and international specialists. It was also kept in mind that the courses’ subject matter and contents complement university disciplines and that they offer perspectives that are generally not addressed during the regular academic year or in UMH graduate programs.

Furthermore, these courses have incorporated the training needs of distinct institutions and organizations from the public sector, the private sector, and the civil society that constitute the social fabric in which the UMH is a part.

The Summer Courses’ general objectives include, among others, catering to various branches of knowledge and expertise, addressing current issues that are subject to reflection and that encourage debate and the discussion of ideas, as well as fostering the university community’s cultural, political, artistic, scientific, and literary life, in addition to enhancing active participation by its students.

In the 2015 Summer Courses, 1,420 students took part, and this was 2% more than in 2014. Within the Xarxa Vives network, the UMH is the university that offers the most courses, and is second in terms of students enrolled. Despite the majority of the participants being university age (some 55% between 18 and 24), more than 30% of them are over the age of 30.

For further information on programs, events, and registration, click on this link: https://cursosdeverano.umh.es/