Researchers at the Miguel Hernández University of Elche (UMH), Paloma Alonso Magdalena and Ángel Nadal, have received funding from the European Commission to develop the first test for the identification of endocrine disrupting compounds, which have the capacity to increase the risk of developing diabetes and obesity. These substances can be found in food, medicines, pesticides, plastics, and cosmetics, and interfere with normal hormone function. Both projects will be carried out at the Institute of Research, Development and Innovation in Sanitary Biotechnology of Elche (IDiBE, its Spanish acronym), located on the UMH Elche Campus. 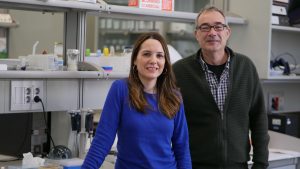 The project, “An integrative strategy of testing systems for the identification of endocrine disruptors related to metabolic disorders” (OBERON), led by researcher Paloma Alonso Magdalena, has been endowed with 259,706.25 euros for four years. For its part, the project, “Generation of new integrated and internationally harmonized approaches for the testing of endocrine disruptors” (GOLIATH), led by researcher Ángel Nadal, will be financed with 672,862.50 euros and is to last five years. Both projects are part of the Horizon 2020 Framework Programme’s third pillar, Societal Challenges, concerning health, demographic change, and wellbeing.

Their work is part of a consortium that includes researchers from different European universities and government environmental protection agencies. Their objective is to develop the first standardized tests to identify chemical compounds in everyday life as endocrine disruptors.

Endocrine disruptors are chemical compounds the population is exposed to daily and are capable of altering the production, metabolism, action, and elimination of natural hormones in the body. Specifically, UMH researchers will work with compounds already recognized as endocrine disruptors, exposing them to in vitro pancreatic cell models. The outcome of these investigations would be the first test with a possible global application for the identification of chemical compounds that alter normal functioning of pancreatic beta cells. These cells are responsible for producing and secreting insulin, the only hormone capable of lowering blood glucose. If beta cells do not work properly, there is a risk of developing diabetes. The effect of endocrine disruptors has been associated with an increase in the number of hormone-dependent cancers, sterility, osteoporosis, thyroid diseases, metabolic diseases (such as diabetes, hypertension, and obesity), among other affections and health problems.

Both researchers are internationally recognized in the field of cell physiology and members of the UMH Basic Diabetes Research Unit, led by Professor Nadal, who was  recently convened by the European Commission on behalf of the Endocrine Society for the development of protection policies against harmful agents that affect the endocrine or hormonal systems.

For more information about the Basic Diabetes Research Unit at the UMH, please turn on English subtitles for the video at https://youtu.be/q-JvrumaSrI