The Miguel Hernández University of Elche (UMH) sits in fifth position in the ranking of the best Spanish universities. Likewise, in the Innovation and Technological Development classification, the UMH is third, while in terms of Teaching, it occupies fourth place.  These are the conclusions of the seventh edition of the 2019 U-Ranking project, a joint initiative by the BBVA Foundation and the Valencian Institute of Economic Research (IVIE). 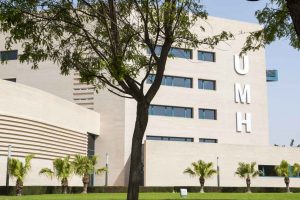 Furthermore, most of the undergraduate programs offered at the UMH are found within the top 5 positions in the classifications of Teaching, Research, and Innovation & Technological Development. Among Valencian Community universities, the UMH is in second position, along with the University of Valencia, both with an index of 1.2, and only surpassed by the Universitat Politècnica de València.

Moreover, this ranking places most of the UMH undergraduate programs within the five top positions according to the report’s predetermined formulas. In this sense, the UMH sits in first place for its bachelor programs of Occupational Therapy, Pharmacy, and Podiatry; it is second for Business Statistics, Medicine, Psychology, and Public Safety & Private Security. UMH programs of Fine Arts, Law, Physiotherapy, and Labor Relations & Human Resources are fourth; in Biotechnology, Food Science & Technology, Environmental Science, and Computer Engineering in Information Technologies, the UMH is fourth. Rounding out these prestigious levels are the UMH bachelor programs of Physical Activity & Sports Sciences, Audiovisual Communication, Agro-Food & Agro-Environmental Engineering, Telecommunications Technology Engineering, and Mechanical Engineering, which all occupy the fifth position.

Further information about this ranking is available at http://www.u-ranking.es/analisis.php. 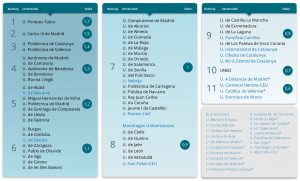