Exhibitions on the Work of Pop Artist Isabel Oliver

The Vice Rectorate for Culture at the Miguel Hernández University of Elche (UMH) has organized two exhibitions on Spanish pop artist Isabel Oliver, entitled Discursos feministas 1970-2022 (Feminist Discourse 1970-2022) and Contexto y geografía política del pop en España (Context and Political Geography of Pop in Spain). Both exhibitions are currently on display in the Universitas and Gray rooms, respectively, of the Rectorado & Consejo Social Building on the Elche Campus, and they will remain open for public viewing through July 22. 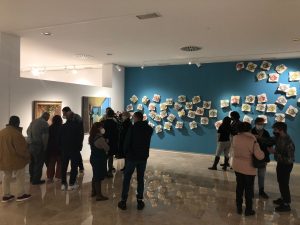 According to the organizers, the body of work by Isabel Oliver has shown throughout 40 years the need to be vindicated as a key exponent of modernity and Spanish feminist art. She has been prolific, both as an artist and as a professor of fine arts at the Polytechnic University of Valencia. Her work, with a strong feminist imprint, was relegated during the 1970’s due to the reluctance of institutions and galleries to respond to her polemical expressions, as well as her status as a female artist, under a historical and social context that was complicit in these inequalities.

With this exhibition, the UMH and the Vice Rectorate for Culture aim to continue promoting the work by Isabel Oliver, and join the efforts that other cultural centers have made, including the Tate Modern (The World Goes Pop, 2015), Reina Sofía National Art Museum (Fuera del canon. Las artistas pop en España, 2019), and the Valencian Institute of Modern Art (A contratiempo. Medio siglo de artistas valencianas, 2018), along with art critics and historians, such as Isabel Tejeda, who is the curator of Isabel Oliver’s exhibition, Discursos feministas 1970-2022. Oliver’s work adheres mainly to the current of Spanish pop, whose discourse was characterized by the political criticism of the Franco dictatorship through humor and irony as resources and tone of the images. In Isabel Oliver, there is a pictorial line close to the Valencian pop artists from Equipo Crónica (of which she was a member from 1971 – 1975), which evolved towards a type of personal figuration.

The exhibition features, from these aspects, some of the most representative pieces from Oliver’s works of art, as well as a documentary section referring to the specifics of the political and social context of Spanish women during the dictatorship and Spanish transition to democracy; this this was the environment Oliver was born into and where she was formed. With paintings from the series of La mujer (1970-73), she questions her role and her representation through the media during this historical period. Pieces from her landscape series (somewhat less common in Spanish pop), Paisajes Pop (1974) and La mercantilización del arte (1975), combine bucolic prints with elements from tasks that are traditionally considered female along with business spreadsheets. The exhibition also offers references to her El juego (1973) series, which shows “impossible” board games as metaphors for a reality governed by marked cards. There are also more recent paintings by this artist from the past decade. These mark a return to the discourse from her efforts during the 1970’s, opening a way to criticism of the feminine iconography in the history of art and the role in nullifying self-awareness by the women’s branch of the Falange political movement in Spain during the dictatorship.

This project is complemented by the Contexto y geografía política del pop en España exhibition that is on display in the Gray Room. This journeys back to some of the hits of Spanish visual culture during the decades of the 1960’s and 70’s, a period when the public sphere was repoliticized and anti-Franco discourse emerged in pop. Artists such as Isabel Oliver were considered rare exceptions, but they participated in the creation of new formulas for making and consuming art.

With a doctorate in fine arts and full professorship from the Polytechnic University of Valencia, Isabel Oliver (Valencia, 1946) began working professionally in the 1970’s, a period in which she began to experiment with figurative art, a style upon which she signed most of her work and during which she was influenced by Equipo Crónica. Oliver then worked on an unprecedented iconography of the situation and image of women in the history of art and in Spanish society, in series entitled La mujer, El juego, De profesión, Sus labores, Paisajes Pop, plus La mercantilización del arte. Series of hers that are more recent include Paseos por el museo, Con memoria, Recintos privados, and Espacio público, among others.

For her part, Isabel Tejeda (Madrid, 1967) is a critic, curator, and full professor from the University of Murcia. She has published essays and articles for musuems, including the Reina Sofía National Art Museum, Valencian Institute of Modern Art, Ibero-American Museum of Contemporary Art, Museum of Contemporary Art of Castilla & León, Siena Contemporary Art Center (Italy), and the Museum of the University of Nebraska (USA). She has also curated exhibitions at art centers, such as the Círculo de Bellas Artes, MUA, la Principal Tabacalera, Valencian Institute of Modern Art, Scottish National Gallery, and the Mapfre Foundation. She was recently awarded the Juana Frances Prize for Fine and Visual Arts by the UMH.