Researchers of the Evolutionary Genomics Group at the Miguel Hernández University (UMH) in Elche, with the collaboration of researchers of Cavanilles Institute for Biodiversity and Evolutionary Biology in the Science Park at the University of Valencia (UV), have discovered the smallest aquatic bacteria described worldwide. The researchers of the Research Group of the UMH, Francisco Rodriguez Valera, Rohit Ghai and Megumi Mizuno Carolina, have participated in this study, published in the scientific journal “Nature Scientific Reports”. 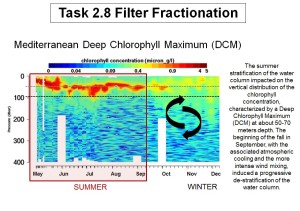 The results of the research are relevant not only for the discovery of a whole new group of bacteria with different genetic characteristics but for the possible ecological significance of this group of bacteria called Candidatus Actinomarinidae.

The researchers have studied the so-called Deep Chlorophyll Maximum (DCM) in several areas of the planet and, in particular, in the Mediterranean Sea and have described, with massive sequencing techniques, the entire microbiota that inhabit in these areas of seas and oceans. According to the researchers, “these techniques allow shelling the whole microbial diversity of an ecosystem and identify key genes that may explain the ecological role of microorganisms in the ecosystem; then, the results are compared with environmental data drawn from the study in order to obtain more information about how biogeochemical cycles work.”

Molecular analysis techniques have allowed to characterize this new group of bacteria. Combined with other sophisticated microscopic techniques and cell analysis like hybridization in situ and flow cytometry, the researchers have determined that “these are the smallest free-living microorganisms described so far, not only according to their cell measure but to the size of its genome, which is quite close to the theoretical limits on the minimum size of a living being “.

With a biovolume from 0.006 to 0.024 μm3 (average of 0.013 μm3) and an average diameter of 0.292 microns, these bacteria are considerably smaller than the free-living organism that held that record: the Pelagibacter ubique. A bacteria, also marine, with a range of biovolume between 0.019 and 0.039 μm3. This is almost the double size of the bacteria discovered by researchers at the UMH and UV. Compared with commonly known bacteria such as Escherichia coli, the bacteria described in this paper has a size 150 times lower.

Collaboration between research groups of UMH and UV has advanced knowledge of microbial diversity of aquatic ecosystems and provide new data on the Albufera of Valencia and the Mar Menor. This collaboration continues in the search for explanatory mechanisms of microbial biodiversity patterns in aquatic ecosystems. Besides, it allows to know the dominating microbial metabolisms in these environments, determinants to understand the functioning of biogeochemical cycles at both regional and global scale.