The Executive Board of the Miguel Hernández University (UMH) of Elche has approved to confer cartoonist Antonio Fraguas de Pablo, better known as Forges, as Doctor Honoris Causa. The investiture is to take place on October 3, the opening day of the 2014/2015 academic year. José Juan López Espín, a UMH faculty member and Director of the Office for Communication, Marketing and the Press of the university, is to sponsor the new Doctor Honoris Causa. 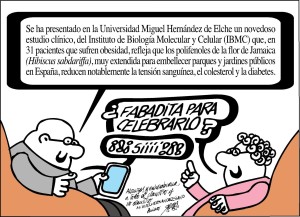 This artist, son of a Galician father and Catalan mother, was born in Madrid in 1942. When he was 14, he began working as a film scanning technician at Spanish public television (TVE). He left the staff of TVE to engage professionally in graphic humor. In 1964, he published his first cartoon in the newspaper Pueblo. In 1982, he began publishing the editorial cartoon in Diario 16 and then in El Mundo. Since 1995, he has been in charge of the editorial cartoon of El País, and he is currently also involved in the radio program No es un día Cualquiera with Pepa Fernández at Radio Nacional de España (RNE).

Forges is an honorary member of the Journalist Association of Catalonia, and in 2012 was appointed technical director of the Quevedo Humor Institute. He has been awarded several prizes, including the Libertad de Expresión of the Unión de Periodistas de España and the Creu de Sant Jordi, the highest Catalonian honor. In 2007, Forges was awarded the Medalla de Oro al Mérito en el Trabajo by the Council of Ministers and, in December 2013, he received the Premio Nacional de Periodismo Pedro Antonio de Alarcón in recognition for his professional career.

More information about the cartoonist is at http://www.forges.com/