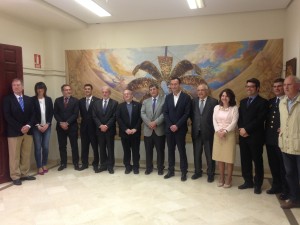 Participating in the act included the UMH rector, Jesús Pastor, his counterpart at the University of Valencia and president of the Conference of Valencian Public University Rectors (CRUPV), Esteban Morcillo, the mayor of Elche, Carlos González, in addition to the executive president of the Misteri d’Elx Board of Trustees Governing Board, Fernando García. Also attending the ceremony were the rectors of the Universitat Politècnica de València and Universitat Jaume I, Francisco José Mora and Vicent Climent, respectively, the acting rector of the University of Alicante, Amparo Navarro, and the director of the UMH Misteri d’Elx Chair, Pablo Mas.

By signing this agreement, these institutions commit themselves to disseminate theatrical, musical, linguistic, literary, anthropological, social, and artistic values, etc. of the Misteri d’Elx among students and faculty at the participating universities. They will collaborate in programming and/or hosting academic, scientific, and cultural activities whose aim is to disseminate and research the Misteri d’Elx. Participation by their faculty and student bodies in academic, scientific, and cultural activities concerning the Misteri d’Elx will be encouraged. Furthermore, mutual academic counseling that permits publicizing the Misteri d’Elx with every guarantee will be facilitated, and new commitments of mutual interest will be established.

The mixed commission will be comprised of representatives of the Misteri d’Elx Board of Trustees; CRUPV president, Esteban Morcillo; and the director of the UMH Misteri d’Elx Chair, Pablo Mas.