The Vice Rector for Culture and University Extension at the Miguel Hernández University of Elche inaugurated the Como en casa (Just Like Home) initiative this morning, a mural intervention project that began last year on the pediatric oncology floor at Alicante University General Hospital. In light of the results of this initiative, the project was expanded to the area of pediatric surgery on the same floor. 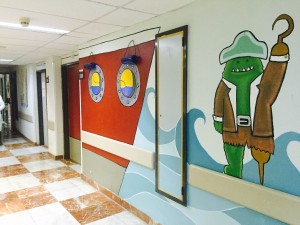 In this initiative, developed by students and instructors at the UMH Faculty of Fine Arts, also collaborating are the Conselleria de Sanitat Universal i Salut Pública and the Fundación Aladina, which subsidizes this project. The authors of this idea are UMH Vice Rector for Culture and University Extension, Tatiana Sentamans, Art Department part-time lecturer Imma Mengual, and student María Laúdes González.

According to the organizers, the Como en casa project strives to transform monotonous and boring oncological and pediatric surgery hospital stays into worlds full of magic that children can visit with help from drawings adorning the walls, ceilings, doors, and hallways. The objective was to introduce common household elements in hospital areas, such as a coat rack, bookcase, and alarm clock, mixed with fun characters and their own drawings to create a more personal environment and ease the stays for long-term child patients from the areas of oncology and surgery, as well as their families, and try to make them feel like they would at home. This idea intends to remove the drama from medical environments and create spaces in which to become distracted using imagery and art.

The project was divided into two phases that include 16 rooms, hallways, doors, the education room, and control desk. The first phase, pediatric oncology, resorted to domestic objects illustrated and colored in an illusionary manner, accompanied by characters like animals and monsters. Its second phase, pediatric surgery and the educational room, grew out of illustrations made by child patients with elements of everyday life as well as fantastic spaces and places to travel to, to imagine, and escape the hospital environment in a playful and fun manner.

The decorations on this floor add to the humanization program being carried out for some time at the Alicante General Hospital. For its part, the Fundación Aladina aims to help children with oncological diseases and to perform care tasks at different hospitals.

The Fundación Aladina, www.aladina.org, was founded ten years ago and since then hasn’t stopped helping children and adolescents with cancer as well as their families. With this new intervention in Alicante, the entity Paco Arango presides over is now present at eight Spanish hospitals and attends to an average of 1,500 children every year.

Aladina offers comprehensive support ranging from psychological assistance to physical training, summer camps, playful accompaniment, and economic support for families with economic difficulties. Moreover, the foundation undertakes numerous works and interventions of interest such as decorating hospitals and creating new playrooms. So far, its largest project was the construction of the Maktub Center for bone marrow transplants at the Hospital Niño Jesus. This year, Aladina is planning on remodeling the pediatric ICU at that hospital, which attends to more than 800 severely ill children every year from all over Spain.

no images were found