Alicantino artist Pablo Bellot is exhibiting Cinco Actos, a sample of ceramics, video, and sonorous sculptures in the Universitas Room of the Rectorado & Consejo Social Building on the Elche Campus of the Miguel Hernández University of Elche (UMH). Simultaneously, photographer Rubén H. Bermúdez is showing Y tú, ¿por qué eres negro? Diario de una investigación (And you, why are you black? Diary of an investigation) in the Gray Hall of the Rectorado & Consejo Social Building. Both exhibits are on display until September 15. 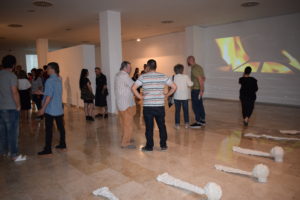 The project by Bellot revolves around the impossibility of the communicative act. According to the artist, the hyperreality and excess visuality provided by the contemporary media raise the paradox of how it is possible to get a message across amid the hullaballoo. In this sense, Pablo Bellot presents Cinco Actos, an exhibition project that includes five pieces from his Acts of Communication series. ACT OF COMMUNICATION No. 8, No. 4, No. 1c, No. 19, and No. 13 are the five proposals the artist presents with ceramic pieces, video, and sonorous sculptures. Bellot poses fire, vomit, and smoke signals as ultimate communication possibilities between human beings. According to the artist, these are discontinuous, aggressive, incomplete, and desperate communications that refer ironically, with a punk nature, to the failure of the communicative functionality of contemporary art.

Pablo Bellot is a recipient of the Boomerang Grant, which is given jointly by the UMH Faculty of Fine Arts of Altea, the Art Department, and the Vice Rectorate for Culture and Extension, with the objective of renewing contact with graduates, supporting their professional artistic endeavors, and vindicating their current work. The Boomerang Grant consists in funding an exhibition project selected from a public call, in which to be eligible competing artists must have studied at the UMH Faculty of Fine Arts. Bellot was part of the first fine arts graduating class and Cinco Actos is a result: a project completed entirely on the Elche Campus. For this, the artist worked mainly on the Video Stage, in the Ceramic Workshop, and exterior campus areas.

Furthermore, Y tú, ¿por qué eres negro? Diario de una investigación by photographer Rubén H. Bermúdez is the question that he has had to answer throughout his entire life. The sampling includes images taken by the photographer as snapshots from his family album, which coexist with fragmentary narratives of his own biography and images from contemporary popular culture. Interested early on by the question of the formation of racial features and the reasons for his black physiognomy in a biologically white family, Bermúdez soon redirects his gaze towards that imaginary of that black in Spain. According to the artist, from the approach that the image is always ideology, numerous images from popular culture can be seen (from Cola Cao to Michael Jackson to black politicians) that speak of racism as a structural element from a Western heteronormative white society.

Rubén H. Bermúdez (Madrid, 1981) works as a photographer at Barriga Estudio and is an instructor at the MadPhoto School. He has authored the photo books Berlin: Looking for freedom and Y tú, ¿por qué eres negro? He is a recipient of the FotoPres Grant and can also be been seen at the CaixaForum Barcelona in its La nueva imagen documental (The New Documentary Image) exhibition. Just like other current photographers and artists, Mr. Bermúdez raises the excess of visuality in contemporaneity and positions himself critically before the images. Because of this, the artist prefers screenshots, appropriating anonymous images, or at most taking snapshots with his mobile phone over the photographic ritual of camera, tripod, and focusing. 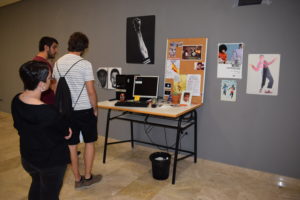