During the Feast of Saint Thomas Aquino, the Miguel Hernández University of Elche (UMH) conferred journalist, Ramón Lobo Leyder, with the degree of Doctor Honoris Causa. José Luis González, a UMH associate professor from the area of Journalism, sponsored the new Doctor. In the ceremony, the Gold Medal was also presented to professor and former rector of the UMH, Jesús Pastor Ciurana; fifty-three new PhD’s were recognized, and six Extraordinary Doctorate Awards were announced. 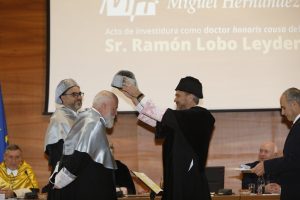 Presiding over the event were UMH rector, Juan José Ruiz; rector of the University of Alicante, Manuel Palomar; UMH Board of Trustees president, Joaquín Pérez Vázquez; UMH Vice Rector for Research, Domingo Orozco Beltrán; and UMH Registrar, Mercedes Sánchez Castillo. Attendants at the ceremony included, among others, the mayor of Elche, Carlos González, and the Director General of Universities, Pilar Ezpeleta.

With this act, the UMH aims to commemorate the career path of journalist and writer, Ramón Lobo, who has collaborated in various forms of media, including El País, Expansión, Cinco Días, and La Gaceta de los Negocios. Currently, Lobo also collaborates with InfoLibre and El Periódico. Likewise, he is a participant on the A vivir que son dos días radio program at Cadena SER, and since October 2014, Lobo has published interviews on El Diario.es, specifically in its Tipos Inquietantes section.