NEUROTECHEU, an Erasmus+ project to address ageing of the population

The European University of Brain and Technology (NEUROTECHEU) consortium, of which the Miguel Hernández University of Elche (UMH) and seven other centers of excellence form part, including the University of Oxford and Karolinska Institutet, has been chosen by the European Commission in the Erasmus+ European Universities Initiative. This consortium aims to create a borderless higher education interuniversity campus to train future professionals who will have to address challenges brought on by an ageing population and the associated brain disorders and disabilities. 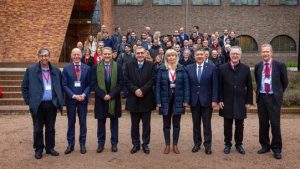 Leading the UMH project are investigators Juana Gallar and Santiago Canals from the Institute of Neurosciences, a joint center between the UMH and the Spanish National Research Council. The project is also bringing together faculty and researchers of neuroscience and engineering, the Service of International Relations, and Vice Rectorate for International Relations. NEUROTECHEU will launch a comprehensive training program for undergraduate, master, and PhD students, in addition to supporting lifelong learning that expands the reach of universities beyond national borders.

NEUROTECHEU is also collaborating with more than 20 research institutes and affiliated companies. This consortium will form a new generation of multidisciplinary scientists and engineers who will have direct access to cutting-edge infrastructure for basic, translational, and applied research. Its objective is to help Europe address challenges that arise as its population ages.

According to the project leaders, brain disorders are one of the leading causes of disability, and they pose a significant burden upon society. In Europe alone, they annually account for 24% of all disease-related burden, claim 1.2 million lives, and leave a further 21 million individuals with disabilities. Furthermore, the population of elders over 65 is growing faster within Europe than anywhere else. By 2050, one of four European citizens will be over the age of 65. Because of this, the social and economic impact of brain disorders is projected to skyrocket in the coming decades as Europeans gray and life expectancies increase.

The action plan for the consortium’s first phase includes three main lines of work: Campus+, NeurotechEU Graduate School, and NeurotechEU Lifelong Learning Center. Besides its educational mission, NEUROTECHEU research will facilitate technological and social innovation, provide multidisciplinary and intersectoral professional expertise for scientists and engineers, and foster direct access to state-of-the-art infrastructure. It is a consortium to transform Europe into a world leader in brain research and neurotechnology.

The principles of cooperation for NEUROTECHEU include creating a long-term joint strategy in neuroscience and neurotechnology to improve European competitiveness in education, research, economics, and society; encourage uninterrupted mobility for students and personnel to study, train, research, and innovate; create flexible curricula adapted to the needs of every student that are not limited by institutional capacities or national borders; close and long-lasting cooperation between partners for a trans-European network of excellence in research on the brain and technology. From the Institute of Neurosciences, Juana Gallar and Santiago Canals indicate that NEUROTECHEU will furthermore enhance European identity between students and investigators through multicultural, multilingual, international, and intersectoral experiences all over the continent.

‘European Universities’ are transnational alliances between institutions providing university education within EU countries that unite their forces to benefit students, faculty, and society. The budget for the 41 alliances has been set at 287 million euros. In the 2020 call, the European Commission announced 24 new European Universities (chosen from 62 applications), and these have been added to the 17 that were chosen from the 2019 call.