The Rectorado & Consejo Social Building on the Elche Campus of the Miguel Hernández University of Elche is proud to display the art exhibitions of ‘Genius loci’ by Anna Talens and ‘Fue. Te das cuenta, ahora’ (They are gone. You now just noticed) by Rakel Gómez Vázquez. The former is on display in the Universitas Room, while the latter has been set up in the Gray Room. Both collections have been put together by the Vice Rectorate for Culture, and they will remain open to the public for viewing through March 11, 2022. 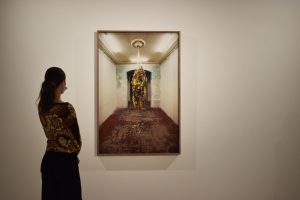 Anna Talens, an artist from Valencia, Spain, who lives in Berlin, Germany, presents the ‘Genius loci’ exhibition, which was curated by Valencian art historian, Alba Braza. The collection brings together some of the most representative work throughout this artist’s career. Materials and objects, such as gold, silver, lime, silica, glass, cast shadows, and found objects, describe stories about the passage of time and the transformation of cities. According to the curator, “the materials employed respond to the idea of creatio ex materia—creations out of matter—and as such, acquire the ability to contain history and microhistories, they transform over time, and represent allegories and symbols that the collective memory associates with concepts, for Western as well as Eastern cultures alike.”

From the installations, intervening objects, projections, and photographs that make up exhibition, part of the least-known artistic research by Anna Talens can be discovered. Ephemeral and site specific installations located in spaces interstitial or found. For the curator, “the pieces present contain the genius loci, the protective spirit of the location of the architecture found in three locations and moments in the life of the artist: Carcaixent, her birthplace; Berlin, the city where she currently resides and where she has practiced a large portion of her professional career; and Rome, a city she lived in thanks to the program of artistic residencies by the Academy of Spain in Rome.”

The Vice Rectorate for Culture will also inaugurate the ‘Fue. Te das cuenta, ahora’, exhibition by Bilbao artist, Rakel Gómez Vázquez. This is a series of pieces from her Rojoultramar series, where she takes as object of observation the palm trees from the Casas Indianas, which are a colonial symbol whose trees are threatened by the advance of the red palm weevil plague.

Her art understands creation as research and is structured as expanded documentation. In addition to consulting archives, libraries, and visits to ethnological, ethnographical, anthropological, and art museums, she adds fieldwork and the tools with which she usually creates practical work, through drawings, engravings, installation art, photography, and techniques that are photo-sensitively analog as is cyanotype. This latter technique of analog photography links the Rojoultramar project in two dimensions: historically, as it is a nineteenth century technique, the era of the Indian migratory movement; and symbolically, through its intense ultramarine blue color, to migratory and commercial processes.